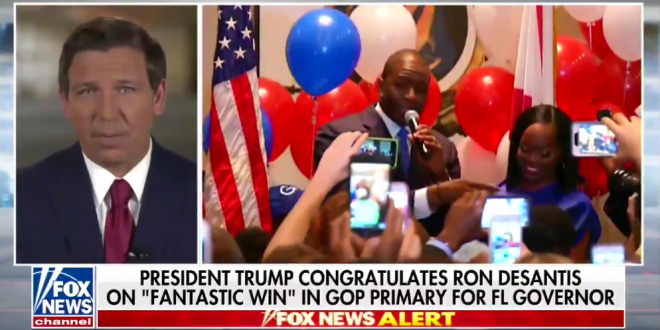 Republican candidate Ron DeSantis’ general election campaign for governor of Florida got off to an abysmal start on Wednesday morning when he went on Fox News and warned voters not to “monkey this up” by electing his Democratic opponent, Andrew Gillum, who would be the first African-American to lead the state.

“The last thing we need to do is to monkey this up by trying to embrace a socialist agenda with huge tax increases and bankrupting the state,” he continued. “That’s not going to work, that’s not going to be good for Florida.”

DeSantis’ spox tells me this is something the congressman says “frequently” to express something that was messed up or not done right.

Spox says it “had nothing to do with race or anything like that” but just talking about the situation in Florida. #FLGOV https://t.co/Eg6I3W9ivx

Although Ron Desantis points out how surprisingly “articulate” Gillum is, he doesn’t want to “monkey” things up by allowing him to win.
These dog whistles are just a coincidence, I’m sure
😒😒#FLoridaPrimaries pic.twitter.com/M2TxRnNnG8

Ron DeSantis says on Fox that Florida shouldn’t “monkey this up” by electing his opponent, the first African American to win a major-party nomination for governor in Florida. https://t.co/g9JvXhEesY pic.twitter.com/jzb4Ud39ag