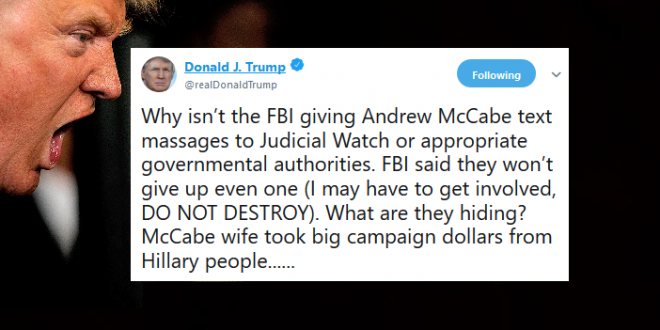 President Trump questioned Saturday morning why the FBI had not provided conservative watchdog group Judicial Watch and others with text messages of former Deputy FBI Director Andrew McCabe, warning he “may have to get involved.”

Andrew McCabe’s wife, Jill McCabe, accepted thousands of dollars in donations for a Virginia state Senate election in 2015 from a political action committee headed by Terry McAuliffe, who is close to the Clinton family and chaired Hillary Clinton’s 2008 presidential run.

Earlier this year, Judicial Watch announced that the FBI had refused to provide the group with Andrew McCabe’s text messages, in response to a September 2017 Freedom of Information Act lawsuit.

Judicial Watch was founded in 1994 by crackpot right wing birther Larry Klayman, who is perhaps most infamous for organizing “patriot rallies” calling for the overthrow of Barack Obama. Klayman once used a megaphone outside the White House to demand that Obama “put the Koran  down and come out with your hands up.”

In 2003 the notoriously litigious Klayman left Judicial Watch for a failed run for the US Senate, suing the group he founded and its current president on multiple grounds. Judicial Watch has an annual budget of $35 million, a large portion of which comes from the Scaife Foundation.

Why isn’t the FBI giving Andrew McCabe text messages to Judicial Watch or appropriate governmental authorities. FBI said they won’t give up even one (I may have to get involved, DO NOT DESTROY). What are they hiding? McCabe wife took big campaign dollars from Hillary people…..

…..Will the FBI ever recover it’s once stellar reputation, so badly damaged by Comey, McCabe, Peter S and his lover, the lovely Lisa Page, and other top officials now dismissed or fired? So many of the great men and women of the FBI have been hurt by these clowns and losers!

Previous Avenatti On His Potential 2020 Run Against Trump: When They Go Low, I Say We Hit Back Harder [VIDEO]
Next Trump Condemns “Racism” Ahead Of DC Nazi Rally