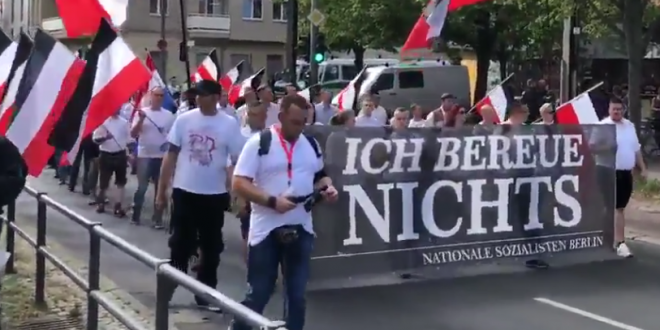 At least one police officer was injured in Berlin on Saturday when around 500 activists shouting “Nazis out” clashed with an equal number of far-right activists marking the 31st anniversary of the prison suicide of Nazi convict Rudolf Hess.

Many of the far-right activists, clad in red and white, hoisted the red, white and black flag of Hitler’s Third Reich. One group carried a sign that proclaimed, “I regret nothing: National Socialists Berlin.”

About 2,300 police officers were on duty to prevent violence at the Berlin event and a separate march by less than 50 people in the Berlin suburb of Spandau, where Hess, a former deputy of Germany’s wartime dictator Adolf Hitler, served a life sentence handed down at the Nuremberg war crimes trials.

Rudolf Hess, who committed suicide in Spandau Prison on August 17, 1987, was one of Adolf Hitler’s deputies. He was, among other things, responsible for signing into law the so-called Nuremberg Laws of 1935, which deprived the Jews of Germany of their rights.

Hess made a dramatic solo flight over the North Sea to Scotland in 1941 with the purported aim of negotiating an end to World War II. He was detained for four years in England, before being sent back to Germany for trial in Nuremberg, where he was found guilty of crimes against peace and conspiracy and sentenced to life in prison.

Although numerous appeals for his release were made by his lawyer, his son and even German politician Willy Brandt, Hess remained in prison until he took his own life, aged 93, by hanging himself using the extension cord of a lamp.

The far-right protesters, including an Adolf Hitler lookalike, wore white shirts to commemorate the 31st anniversary of the death of high-ranking Nazi official Rudolf Hess and carried banners with slogans such as “I regret nothing.”

Earlier this month, German police said 401 anti-Semitic crimes were reported throughout the country in the first half of this year, a 10.7 percent increase from the 362 hate crimes reported in the first six months of 2017.

The data also showed the vast majority of the crimes (349) were perpetrated by neo-Nazis or other far-right extremists. Police said six of the anti-Semitic crimes reported in 2018 so far were motivated by “religious ideology,” which would include attacks motivated by anti-Israel hatred.

Hundreds of neo-Nazis waving flags with the colors of the German Reich marched through central Berlin, protected from counter-protesters by police in riot gear. https://t.co/tT1hSoKZwr pic.twitter.com/yIcrPApxcP

only with intense police protection, a diversion demonstration, and a changed march route could the Nazis march in Berlin. Here they're turning on to Frankfurter Allee. #B1808 pic.twitter.com/oj0FA62ZF1