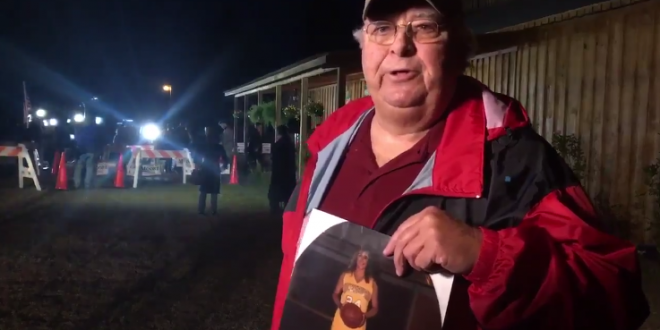 You may recall the lone Alabama man protesting at a Roy Moore rally with a sign lamenting the suicide death of his lesbian daughter. The man’s sad vigil led to an appearance on the Ellen DeGeneres show and now, thanks to a wealthy gay couple, a scholarship fund in his daughter’s name. This week, Elliott Mitchell and Clark West, a gay married couple who live in Florida but who grew up in Alabama, set up the Patti Sue Mathis scholarship, a $100,000 scholarship for an LGBTQ student to attend the University of North Alabama.

“In our older age, I really feel like we’re doing what our hearts want us to do,” West said. West said he can relate to some of the alienation Patti Sue Mathis must have felt. Son of a Baptist minister, West grew up in Dothan and said he was bullied in school, even by a teacher. He said he felt he alone and considered suicide.

Do hit the link and read the rest.

Father, who says he’s a local peanut farmer in Wicksburg, outside Roy Moore rally talks about losing his gay daughter at age of 23 to suicide. “I was anti-gay myself. I said bad things to my daughter, which I regret.” pic.twitter.com/J0oOU0EJI2

Previous Pentagon: We Never Briefed Trump On Parade Costs
Next Christian Activist Calls For Californians To Defy Ex-Gay Torture “Fraud” Law: You Will Be Rewarded In Heaven