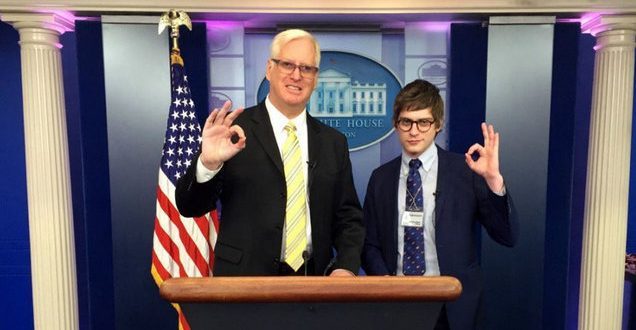 Gateway Pundit White House correspondent Lucian Wintrich, once heralded as the Trump movement’s scourge of the mainstream media’s press corps, is now out at the popular right-wing blog. While Gateway Pundit chief Jim Hoft claimed last week that Wintrich’s exit had been in the works for several weeks, the announcement came right after Wintrich went on a podcast hosted by a prominent white nationalist.

Wintrich’s abrupt exit from The Gateway Pundit marks an anticlimax from his position in early 2017, when his application for a White House press pass threatened to upend the daily press briefings and scored him a string of media profiles. The prospect of Gateway Pundit, a right-wing outrage blog that played loose with the facts, having a White House correspondent looked like the latest Trump-era insult to the press.

In reaction to his canning, Wintrich took to Periscope, where he displayed lobsters about to be boiled, naming them after Hoft and Jared Holt, the Right Wing Watch columnist who first reported on the podcast, which included a discussion of the “scientific” IQ differences between the races.

I’d like to wish Lucian Wintrich the best of luck and blessings on his next endeavor after leaving Gateway Pundit several weeks ago.