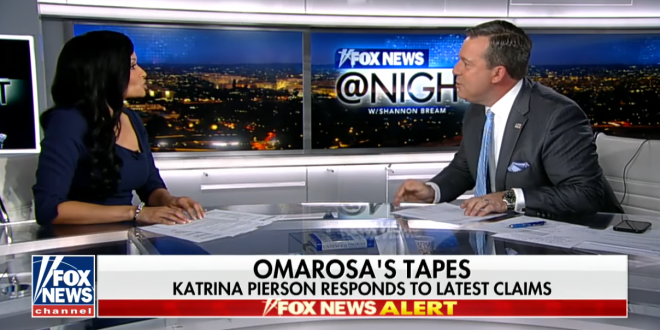 On Monday evening, Pierson appeared on Fox News and when Ed Henry challenged Pierson on Omarosa’s account that she had admitted the N-word tape existed, she said that this account “was absolutely not true.”

Cut to Tuesday morning and Omarosa shared a recording of a conversation about the alleged “n-word” tape in which Pierson appears to confirm it’s existence, bolstering Omarosa’s claim and making Pierson appear duplicitous in her retelling.

Last night Henry played the clip and challenged Pierson in a discussion that became particularly heated, especially for a Fox News program hosting a Trump supporter.

If you ever wanted to see a Fox host shouting at a Trump cultist, this might be your only chance. Watch the clip.