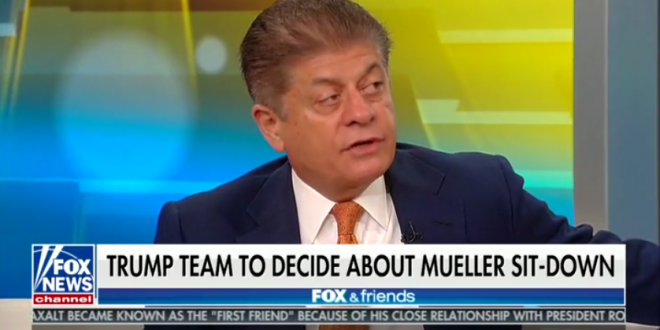 Fox Analyst: Mueller May Have A Case For Conspiracy

Fox News senior judicial analyst Andrew Napolitano said early Tuesday that meeting in Trump Tower that President Trump confirmed was meant to gather information on Hillary Clinton could amount to a crime of conspiracy. During an appearance on “Fox & Friends”, host Steve Doocy asked the analyst whether it is against the law for a person who works in politics to “try and dig up dirt on your opponent?”

“No, of course not, and everybody does it, and to that extent, the president’s correct,” Napolitano said. But the analyst added that there are “federal statutes that prohibit receiving something of value from a foreign national, foreign entity, or foreign government.”

“If there was an agreement to receive dirt on Hillary, from the Russians, even if the dirt never came, if those who agreed, at least one of them, took some step in furtherance of the agreement, then there is the potential crime for conspiracy.”

Previous Don Lemon Hits Back: Trump Is A Racist Bully [VIDEO]
Next Unearthed Columns Show Mike Pence Arguing That Lying About Adultery Is Grounds For Impeachment