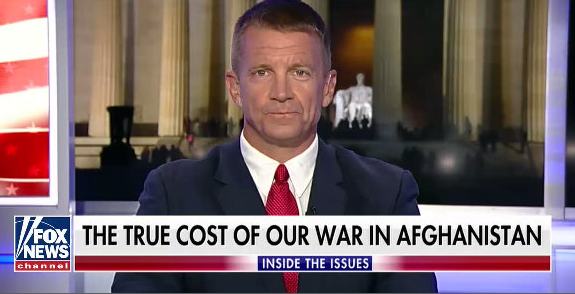 A fairly well-known tactic in today’s political world is this: if you want to get President Donald Trump’s attention, there is no more effective way than to go on Fox & Friends (his favorite television show) and make a public appeal for a policy change.

Such was the case when Blackwater founder Erik Prince appeared on the right-of-center morning show to argue for the privatization of the Afghanistan War.

Prince argued that the US Military efforts in Afghanistan have, at best, become static. And it is true that American military forces have been ensconced in something of a stalemate for 17 years since invading shortly after the attacks after 9/11.

Erik Prince on Fox & Friends says that the military industrial complex is real, and the way to fight against it is for Trump to authorize mercenaries in Afghanistan. pic.twitter.com/wAc1H9CkKG

UPDATE: Media Matters has the transcript.

PRINCE: The military industrial complex is real. OK? The very unhealthy loop of massive spending on the Pentagon into wasteful wars, recycled back into political campaigns is a problem on both right and left. The president rightly campaigned on ending endless wars. This is America’s longest war, it’s the first time we’ve had the kids of soldiers now fighting. Kids that were toddlers when the Towers fell here in New York, now fighting and dying there.

KILMEADE: How long would it take to you win?

PRINCE: Winning looks like a long-term presence on a descending scale. So, it’s a year and a half, to two years of continued structural support. If you turn — look, Afghanistan has significant natural resources. The Taliban is making money from it, none of the legitimate miners are. You set security in those areas, you can actually turn on those parts of the economy. Sadly, the Soviet Union did a much better job of developing the economy, the oil and gas, and the resources there. Afghanistan is sitting on huge amounts of rare earth elements, which is what’s needed for the American manufacturing industry, especially in high tech sectors.

That last line is a dead giveaway.