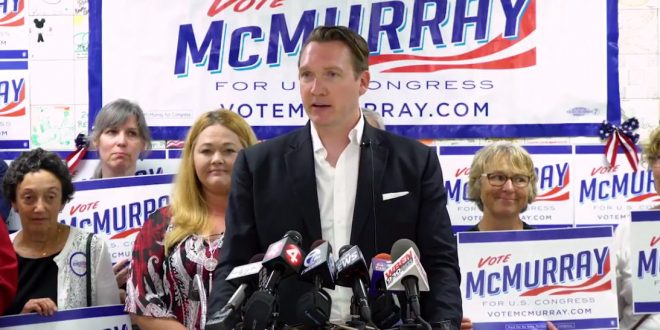 In the not too distant future, Representative Chris Collins will likely have his day in court to answer the insider trading charges that were leveled against him on Wednesday, but the Republican lawmaker may well be judged sooner — by voters in November.

A spokeswoman for the campaign arm of the Democratic Congressional Campaign Committee, Meredith Kelly, now declared the seat to be “firmly in play.”

The Cook Political Report, a nonpartisan political handicapper, moved the seat from a “solid” to “likely” Republican in the hours after the indictment was unsealed. And Jeremy Zellner, a local Democratic leader and chairman of the Erie County Democratic Committee, said, “We’ve been contacted by people all over the country who want to help.”

You could do a little mental math: If the scandal costs him 13 percentage points, and the national environment favors Democrats by 6 points, that could produce a 19-point swing toward Collins’s Democratic opponent, Nate McMurray — almost enough to offset the strong Republican lean of the district (22 points). But you’d be leaving one thing out: Collins is still an incumbent, and incumbents usually outperform the partisan lean of their districts.

In general, Republicans face a very long list of potentially competitive districts — places where Democrats aren’t necessarily favored at even odds, but have a fighting chance when they have no real business doing so. That list got one seat longer after Collins’s arrest. Cashing in a few of those lottery tickets is what might turn a near-miss for the Democrats into a narrow majority — or a narrow majority into a wave.

.@RepChrisCollins Chris, thank you so much for your wonderful endorsement. I will not let you down! @CNN

The fact that @RepChrisCollins was even nominated—shame on the local party bosses.

The fact that he’s still in the race? Shame on him.

If he wins, shame on all of us. Don’t let this man embarrass our region any further.

Hey @BWilliams try using my name and not “progressive activist.” I’m the Supervisor of a conservative town not Che Guevara. Here, I’ll spell it: