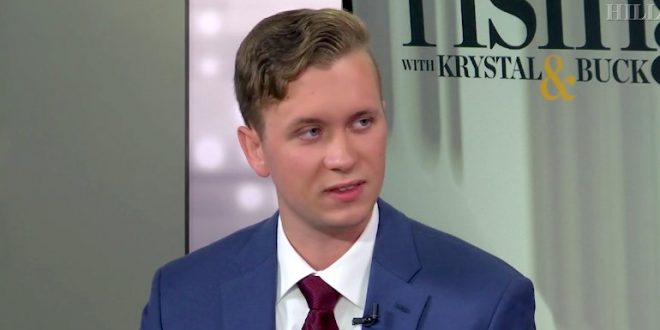 Right Wing Watch researcher Jared Holt says he received death threats after he helped spark the campaign that lead to InfoWars’ Alex Jones being pulled from Spotify, among other social media platforms. “What has been like for you personally since you were sort of publicly involved in this,” Hill.TV co-host Krystal Ball asked.

“Death threats, a lot of death threats and just restless harassment – these Alex Jones fans really know no bounds,” Holt said. Holt said InfoWars listeners and Alex Jones fans have been targeting him on his personal social media profiles, sending him pictures of Auschwitz death camps and telling him “to hang by a noose.”

Holt’s other work is regularly excerpted here on JMG. His recent on-the-ground report from last weekend’s Nazi rally in Portland is very worth your time.

Previous KANSAS: Secretary Of State Kris Kobach Continues To Refuse To Recuse Himself From Recount Of Own Votes
Next WALL FAIL: Melania’s Parents Become US Citizens