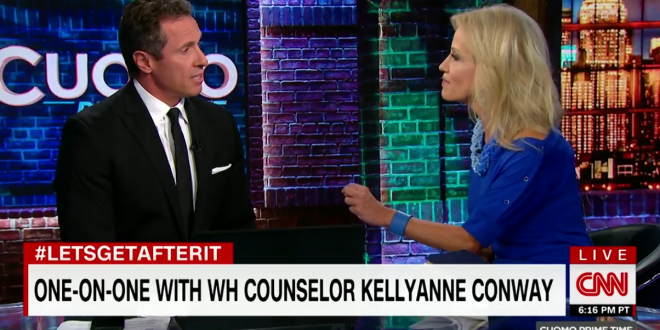 CNN host Chris Cuomo and White House counselor Kellyanne Conway traded verbal jabs at each other in a wild 30-minute interview on Thursday night. The two were set to discuss this week’s avalanche of news, but the interview soon went off the rails.

“There’s a little difference between you and me and the shop you’re working for,” Cuomo told Conway at one heated point during the interview. “The White House?,” Conway replied. “Integrity,” Cuomo said. “How dare you,” Conway shot back. “How dare me?,” Cuomo said.

“Every single night, CNN was featuring another woman with another story. You played the Access Hollywood tape constantly, thinking it would hurt the candidate, he would never be elected,” she said. “CNN interfered in the election daily,” Conway said.