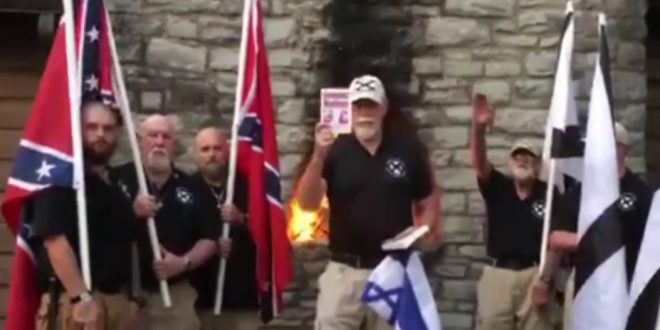 “We are here tonight as the League of the South to put three items to the flame, into the ovens of justice. One is this insidious star of Remphan, the symbol of the Jew. The second is ‘The Communist Manifesto,’ written by Jew Karl Marx, which was responsible for the deaths of over 100 million people in the 20th century. And the Talmud, the blueprint for international Jewry’s plan to rid the world of the white race.

“All of these will be consigned to the flames of justice tonight. 109 times in the history of the world, the Jew has been banished from our midst. Lord, we ask that you make number 110, come soon, for our Southland.

“And we also, father, ask you to reveal to the world that hoax that the Jew has been perpetrating now for many years—something called the Holocaust, which is nothing but a con game based on all three of these symbols. We stand for the white race against all of our enemies, particularly the Jew, and all of these symbols represent that enemy.” – League of the South president Michael Hill.

The League of the South is a Southern nationalist organization, headquartered in Killen, Alabama, whose ultimate goal is “a free and independent Southern republic.” The League defines the Southern United States as the states that make up the Confederate States of America. While political independence ranks highly among our goals, we are also a religious and social movement, advocating a return to a more traditional, conservative Christian-oriented Southern culture.