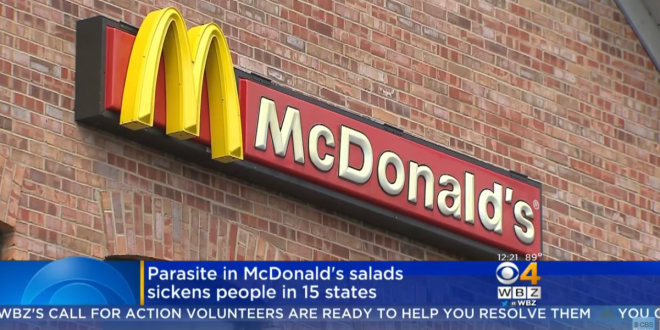 Some 395 people have become sick from eating tainted McDonald’s salads, according to an updated count Friday afternoon from the Centers for Disease Control and Prevention. The illnesses have been linked to salad mix contaminated with the Cyclospora parasite, which is spread through fecal matter. Sixteen individuals have been hospitalized, according to the CDC.

Fifteen states have confirmed cases, primarily in the Midwest. Illinois, where McDonald’s is headquartered, has the most: 202. Shortly after people began getting sick last month, McDonald’s voluntarily stopped selling salads at impacted restaurants and switched salad suppliers.

On July 26, a U.S. Food and Drug Administration analysis confirmed that McDonald’s supplier Fresh Express was the source of the problem. The analysis found Cyclospora in a sample from an unused package of salad mix with romaine lettuce and carrots. The package’s expiration date had already passed.

Fresh Express says the bad salads were only sold to McDonald’s and were not shipped to grocers.

Previous Rosie O’Donnell And Broadway Performers To Serenade Trump From Outside The White House On Monday
Next “Death To Gays” Pastor: God Is Burning Down California In Punishment For Legitimizing Homosexuality [AUDIO]