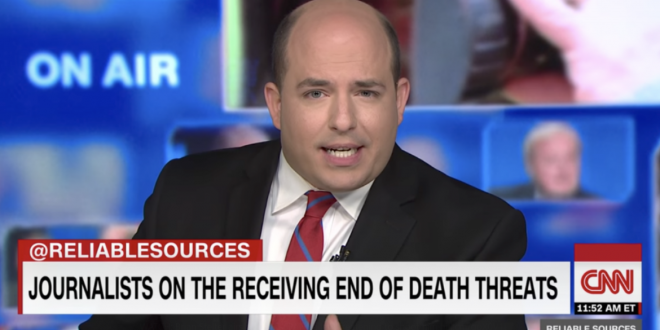 C-SPAN Caller Threatens To Kill CNN’s Don Lemon And Brian Stelter: If I See Them, I’m Going To Shoot Them

At the end of his broadcast Sunday, Reliable Sources host Brian Stelter pointed out that threats against reporters are on the rise before noting that a C-SPAN caller on Friday threatened to shoot him and CNN anchor Don Lemon.

Stelter went on to play the clip, which featured a man supporting the president’s criticism of the media because he claimed that Stelter and Lemon had called all Trump voters racist. The CNN senior media correspondent noted neither he or Lemon said that before airing the last part of the call.

“They don’t even know these Americans out here and they are calling us racists because we voted for Trump?! Come on,” the caller exclaimed. “Give me a break. They started the war. I see them, I’m going to shoot them, bye.”

Stelter points out that the night before the call was made, Sean Hannity had played a 2015 clip of Stelter saying that Trump’s rise was due in part to “racial anxiety and resentment.”

Here’s the clip of that @cspanwj caller saying he’s “going to shoot” Brian Stelter and Don Lemon if he sees them.

The host’s immediate reaction to an overt death threat? Reminding the caller “you have to turn down that television and listen and talk through the phone.” pic.twitter.com/O3gyBLGeXb

Previous Conway: Journalists Are Not The Enemy Of The People
Next CHATTER AWAY: Overnight Open Thread