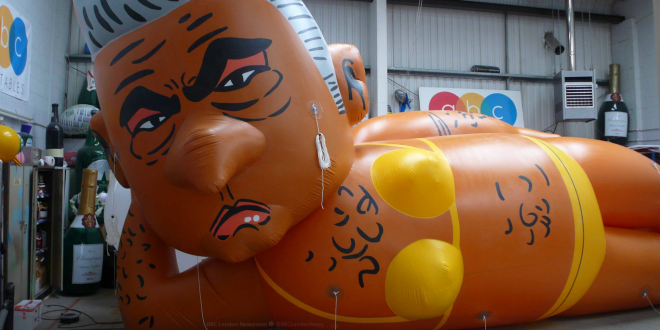 Protesters have been given permission to fly a bikini-clad blimp of London mayor Sadiq Khan over Westminster. Campaigners raised £58,182 for the 29ft-long ‘baby Khan’, which will fly over Parliament Square on 1 September.

A crowdfunding anti-Khan campaign was launched following the giant Donald Trump baby balloon flown by protesters during the president’s visit in July. Mr Khan said: “If people want to spend their Saturday looking at me in a yellow bikini they’re welcome to do so. I don’t really think yellow’s my colour though.”

The money was raised by Make London Safe Again.

“Gonna make a Sadiq Khan balloon”
“Why”
“Gonna put him in a yellow bikini”
“Why? It makes no sense”
“Gonna own the libs”
“Maybe if you did it a month ago”
“Gonna piss off the lefties”
“Nah no one really cares tbh”
“Gonna red pill the nation”
“Are you ok? Do you need a lie down?”

@SadiqKhan has allowed a giant balloon depicting himself wearing a bright yellow bikini to fly over London this weekend. You can read more about this story here: https://t.co/zmDy9RFGCl pic.twitter.com/DYZcRZs1wW

The crowdfund is STILL OPEN. The more we raise the more places in the U.K. we can tour! 😂 https://t.co/HxT4WCUpjs pic.twitter.com/xwT0jIJkfT