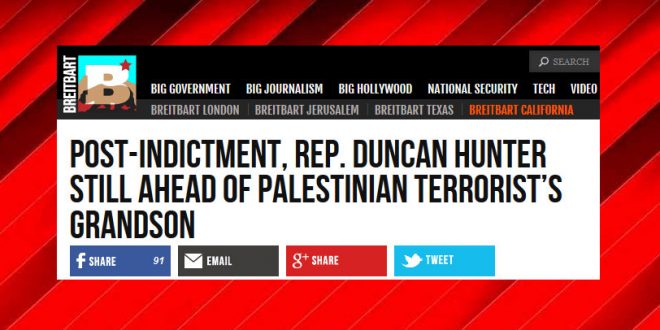 Democratic US House nominee Ammar Campa-Najjar, age 28, was born in California nearly 20 years after his paternal grandfather died. But even though he was raised a Christian and obviously never even met his grandfather, this is how Breitbart headlines their article. An excerpt:

Campa-Najjar has faced heat over his Palestinian terrorist grandfather, Muhammed Yusuf al-Najjar, who headed up the intelligence activities for the Fatah faction and was allegedly linked to the murder of 11 Israeli athletes at the Summer Olympics in Munich in 1972.

Campa-Najjar has distanced himself from his grandfather’s views and actions. Republicans took home a combined 62.4 percent of the vote between three candidates, including Hunter, in the June primary. A no party preference candidate received 1.2 percent.