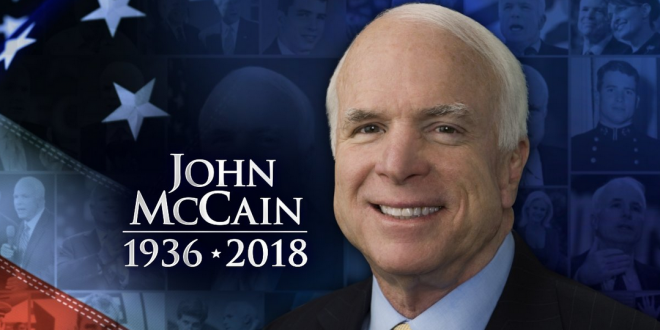 John McCain, who endured more than five years as a prisoner of war in Vietnam before becoming the 2008 Republican presidential nominee and serving Arizona for more than 30 years on Capitol Hill, died Saturday at age 81.

Destined to be remembered among the political giants of Arizona history, the six-term U.S. senator disclosed in July 2017 that he had been diagnosed with a deadly form of brain cancer called glioblastoma.

McCain was a two-time presidential candidate, losing the GOP nomination in 2000 to then-Texas Gov. George W. Bush and the general election in 2008 to then-Sen. Barack Obama.

John McCain will forever be remembered as a war hero, a statesman, and someone that truly loved the United States of America. May he always serve as an example to others as to the respect and class required of higher office. https://t.co/fFYJCej0W3

Politically speaking I didn't agree with many of your positions, but there's no denying that you were a hero.

Plus you pissed DJT off so damn much, and I love you for that.

RIP John McCain. Everyone but the bitter and vicious salute you. You will always be remembered and appreciated.

This was a moment of profound honor. An example all politicians should follow. RIP John McCain. pic.twitter.com/SYaQbDUBGt

We remember Sen. #McCain as a selfless patriot who put family and country first. He honored his family’s military service with not only words, but deeds, serving bravely in Vietnam. Sen. McCain’s collaboration in Congress should be a model for all. We’ve lost a national treasure.

It’s incomprehensible what John McCain went through for our country. RIP.

John McCain belongs to the ages. He perfectly loved this country and served it with valor, courage and integrity for 60 years. He was a patriot and a hero and America will never see a political leader like him again. He was the greatest man I’ve ever known. Godspeed John McCain