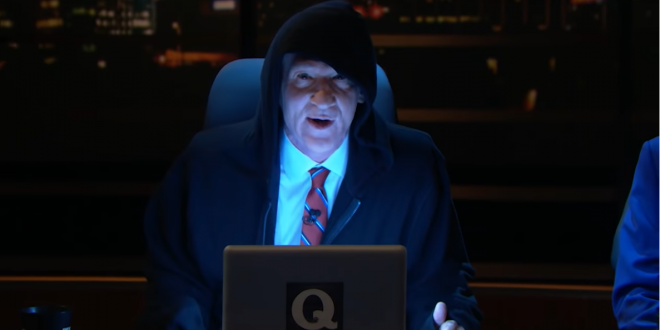 Maher’s final New Rule for the night: “If Trump supporters don’t want us to call them stupid they have to stop coming up with things like Q.”

“Just a few months ago…I was talking about how Republicans are now the Conspiracy Party and that there is nothing so ridiculous they won’t swallow: birth certificate, chemtrails, Jade Helm, Lizard People, and now we have Q.”

Q, the leader of the QAnon conspiracy theory, is an unidentified person with super-high ‘Q’ level security clearance, “so he knows all the shit that goes on in the Deep State,” Maher giggled. “Namely that our government is riddled with a rogue criminal element that is interested in evil in general, but their specialty is pedophilia.”

The conspiracy theory became well-known when Roseanne Barr revealed she believes it, but it made news again this week after dozens of adherents attended a Trump speech in Florida. Maher addressed them directly during the “New Rules” segment of “Real Time.”

After noting the irony of believing Trump is waging a secret war against pedophiles — by playing several clips of his more infamous comments about his daughter, Ivanka — Maher got “serious.”

“The only thing that would make more sense is finding out that a Trump-loathing, conservative-baiter like me is Q,” said Maher, who then looked at the camera. “Which is why it is true. I am Q.”