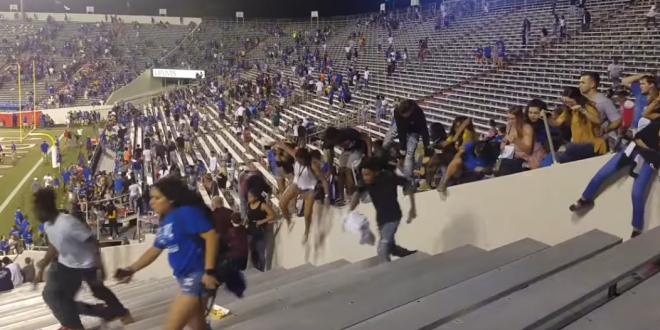 A fight at Little Rock’s War Memorial Stadium during the Salt Bowl high school football game Saturday night set off a panic that sent fans running for the exits, ending the game early.

Little Rock police spokesman Steve Moore said no shots were fired, but a fight among teenagers during the third quarter knocked over a barricade, causing confusion when people attending the game mistook the sound for gunshots.

The annual rivalry game between Benton and Bryant high schools drew a record 38,215 people, officials said. After the melee, some people were in tears, while others ran to hug people they’d been separated from in the confusion. Some people called loved ones.

A witness named Anita said afterwards that a fight had broken out five rows behind where she was sitting. She said the fight then “moved over” two sections. And then, people in the crowd started yelling, “gun!” After that, Anita said, “hell broke loose.” As rumors of a gunman spread, the crowd of 38,000 people panicked, and rushed for the exits.

The Bryant Hornets were in the lead, 28-14. There were just over 9 minutes left in the third quarter. Saline Courier Sports is reporting that according to the rules, that makes the Hornets the winner, since half the game was over and they were ahead.

First downs were hard to come by in the first quarter. We’ve had back to back touchdowns in the second. 7-6 Bryant #SaltBowl pic.twitter.com/XyXfp8jDzR

Absolute chaos here at the #Saltbowl but no clue what’s going on… any suggestions? pic.twitter.com/c0IXLiLMxn

PANIC AT HIGH SCHOOL FOOTBALL GAME: #SaltBowl cancelled in Little Rock. Reports said a fight escalated and barricades were knocked over which sounded like shots being fired. https://t.co/MSfCXI7XOE via @THV11 #arpreps pic.twitter.com/1bBSR9vvqJ

WATCH: Chaotic scene inside @WMStadium during #SaltBowl after people say they heard gunshots.