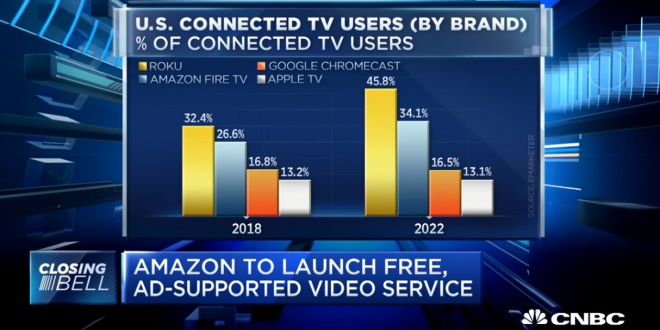 Amazon.com has an ad-supported TV service in the works that would be free to those who use the company’s Fire TV streaming devices. The service is reportedly being developed by the Internet Movie Database (IMDb), which Amazon acquired in 1998. It will be called “Free Dive.” Sources told us that Amazon is talking with major TV studios about licensing older programming and would be similar to Roku Channel, a free, ad-supported app on Roku devices and smart TVs.

Roku shares sank 4.9 percent on Wednesday on a report that rival Amazon is launching a competing video service that’s free. Amazon is in the process of expanding its streaming footprint in order to take on giants such as Netflix. Earlier this week, Bloomberg reported that Amazon was in talks with Sony and Paramount to offer more movies. Citing anonymous sources, the report said options included development funds, as well as money for film production.

Previous Trump Tried To Buy All Of The Enquirer’s Dirt On Him
Next NEW YORK: Fireworks At Nixon-Cuomo Debate [VIDEO]