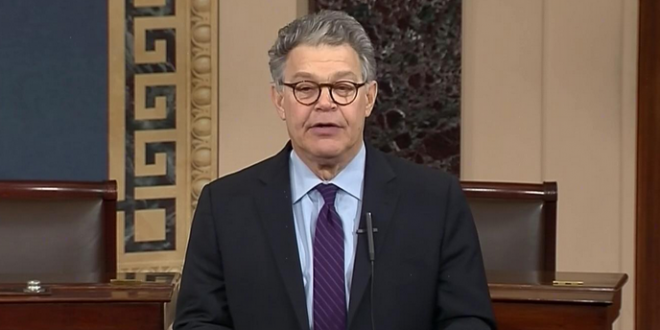 Al Franken: Manafort Won’t Flip Because He Knows If He Talks The Russians Will Surely “Seek Retribution”

That “very limited role,” of course, was “campaign chairman.” And during Manafort’s “very limited time” with the campaign (actually, he spent more time with the campaign than either Steve Bannon or Kellyanne Conway), he helped Trump secure and then accept the Republican nomination, and made sure that the convention platform dropped a plank that called for providing arms to Ukraine in its fight against Russia. And Manafort was there for Get-Dirt-on-Hillary meeting with the Russians at Trump Tower.

Of course, Manafort’s time with the campaign wouldn’t have been so limited had the media not zeroed in on his wildly lucrative consulting deal with brutal, Russian-backed Ukrainian president Viktor Yanukovych and on Manafort’s shady financial ties to Ukrainian and Russian oligarchs close to Vladimir Putin.

Now that he has been convicted on multiple counts of financial misconduct, Manafort stands to spend the rest of his life in prison. As he girds himself for his next trial, most people believe that Manafort is expecting a pardon down the line from President Trump. My wife doesn’t think so.

Franni has been saying for months that Trump won’t pardon Manafort—because he doesn’t have to. Her theory is simple and chilling. Manafort knows that if he talks, the Russians will seek retribution. Trump knows this too, Franni believes. Perhaps, even, he and Putin discussed this in Helsinki.

Previous NSA Leaker Of Russian Hacking Report Gets Five Years
Next ARIZONA: GOP Senate Candidate Ridicules Dem For “Protesting In A Tutu” Instead Of Fighting Terrorists