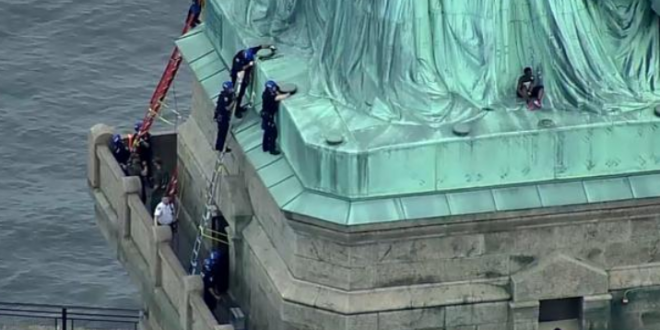 The activist who caused the Statue of Liberty to be evacuated on the Fourth of July has been charged with trespassing, interference with government agency functions and disorderly conduct ​for scaling then icon of freedom. She faces up to a year and a half in prison if convicted.

Manhattan federal prosecutors on Thursday ​charged​ Therese Okoumou, 44​,​ ​with three misdemeanor counts for climbing to the base of the Statue of Liberty on Wednesday and resisting orders to come down​ as she straddled Lady Liberty’s right foot.​

They say the stunt deserves prison time because the protest caused a mass evacuation of Liberty Island and posed risk to the NYPD officers who were ordered to retrieve her. On Wednesday, Okoumou told investigators she was part of a group protest organized by Rise and Resist NYC to protest President​ ​Trump’s immigration policies. ​​

The woman climbed the Statue of Liberty has been charged with trespassing, interference with government agency functions, and disorderly conduct, according to federal prosecutors. Therese Okoumou, 44, was arrested Wednesday and will appear before a judge this afternoon.