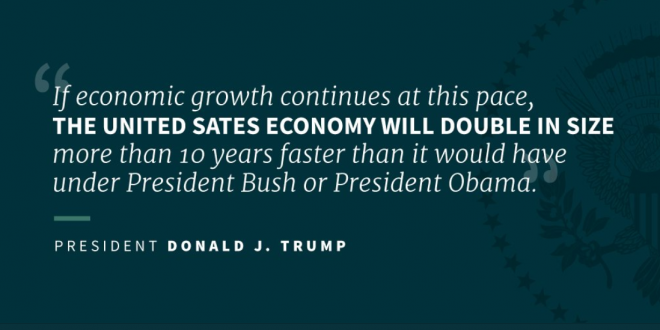 In a tweet that was posted three hours ago and has not been removed at this writing, the White House hailed the booming economy given to the United “Sates” by Glorious Leader. Embarrassing misspellings, aside, here’s some fact-checking from the Associated Press:

The U.S. economy just entered its 10th year of growth, a recovery that began under President Barack Obama, who inherited the Great Recession. The data show that the falling unemployment rate and gains in home values reflect the duration of the recovery, rather than any major changes made since 2017 by the Trump administration.

While Trump praised the 4.1 percent annual growth rate in the second quarter, it exceeded that level four times during the Obama presidency. But quarterly figures are volatile and strength in one quarter can be reversed in the next. While Obama never achieved the 3 percent annual growth that Trump hopes to see, he came close. The economy grew 2.9 percent in 2015.

The economy faces two significant structural drags that could keep growth closer to 2 percent than 3 percent: an aging population, which means fewer people are working and more are retired, and weak productivity growth, which means that those who are working aren’t increasing their output as quickly as in the past. Both of those factors are largely beyond Trump’s control. Previous Bill Clinton: There Can Be No “Brexit” In HIV/AIDS Fight
Next Mattis Denies Report US Is Readying Strike On Iran