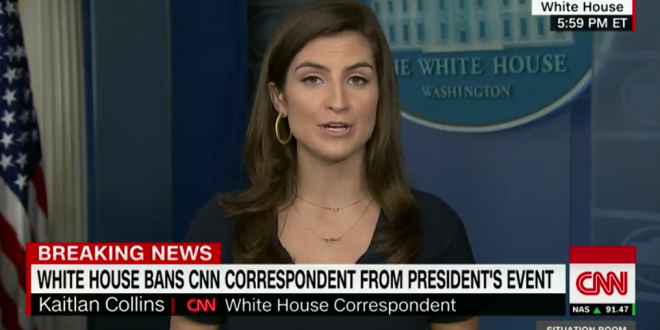 The White House took retaliatory action against Kaitlan Collins, a White House reporter for CNN, after Collins asked President Trump questions at an Oval Office photo op on Wednesday. Collins was representing all the television networks as the “pool reporter” in the room during the early afternoon meeting between Trump and Jean-Claude Juncker, the president of the European Commission.

It is customary for the press pool to lob a few questions at the president. Sometimes Trump responds; other times he does not. On Wednesday, Trump did not answer Collins’ questions about Vladimir Putin and Michael Cohen. Later in the afternoon, the White House surprised the press corps by announcing a press availability with Trump and Juncker in the Rose Garden. It was said to be open to all press, not just the small pool.

According to Collins, shortly before the Rose Garden event she was summoned to former Fox News executive Bill Shine’s office where he and Sarah Sanders told her she was disinvited for asking “inappropriate questions.” As you’ll see below, Wolf Blitzer is pissed.