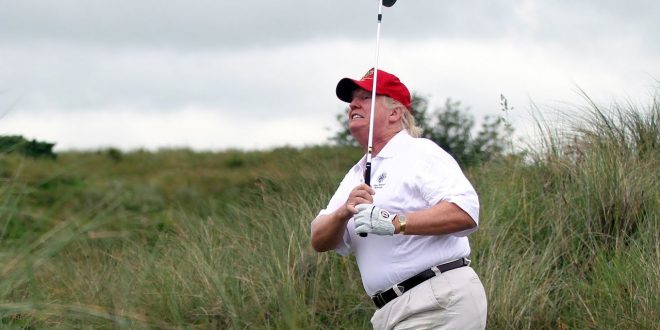 On 111 days of his presidency, Trump has traveled to a golf course and spent several hours there. On a handful of occasions, he or the White House or his golf partners have revealed/admitted that he was playing golf. On most occasions, they haven’t — and the question of who joined him for his hours-long foray around the course is a mystery. On 81 of the 111 days, we think Trump has played golf as president, we have no idea who his partner might have been.

Without further ado, we ask your help. The tool below indicates those days on which we think Trump has played golf and, when we know, his partners. In some cases, we’re trying to confirm people who we believe have played with Trump. For many other days, we have no idea. If you think you might have some insight, click the “Have a tip?” button for the appropriate day and tell us what you know. (It will open a blank email.)

In November, USA Today reported that at least five administration appointees were members of Trump Organization clubs. Trump might have spent last weekend playing a round of golf with the person who could soon end up as deputy attorney general. He might have spent three hours on Saturday chatting with the head of a firm that will soon learn that it is exempt from certain tariffs. We simply don’t know. Perhaps you do.