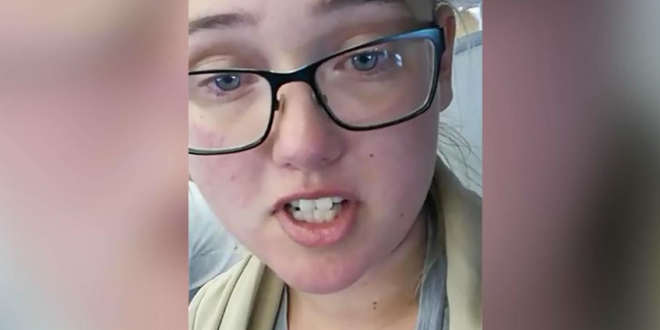 Around the world — from Chicago to Munich to Roskilde, Denmark — airports have become centers of political protest over deportations. Activists have blocked airport entrances, demonstrated outside terminal fences and even stormed a runway in attempts to stop flights carrying deportees.

This week, one Swedish student tried a different approach. When Elin Ersson learned that an Afghan man was scheduled to be deported from Sweden on Monday, she bought a ticket for the same flight. Once she boarded the plane at Gothenburg airport, Ersson refused to take her seat, standing in the aisle until the 52-year-old deportee was released.

Her dramatic act of civil disobedience, which she live-streamed on Facebook in English, forced the flight to be delayed by two hours, according to Swedavia, the company that operates the airport. Ultimately, her efforts succeeded — at least for the time being. The Afghan deportee was escorted off the plane before it took off.

Facing both sympathy and hostility from passengers, the footage shows Ersson struggling to keep her composure. “I don’t want a man’s life to be taken away just because you don’t want to miss your flight,” she says. “I am not going to sit down until the person is off the plane.”

Repeatedly challenged by a steward to stop filming, Ersson says: “I am doing what I can to save a person’s life. As long as a person is standing up the pilot cannot take off. All I want to do is stop the deportation and then I will comply with the rules here. This is all perfectly legal and I have not committed a crime.”

When an angry passenger, who appears to be English, tries to seize her phone, she tells him: “What is more important, a life, or your time? I want him to get off the plane because he is not safe in Afghanistan. I am trying to change my country’s rules, I don’t like them. It is not right to send people to hell.”

About half way through the 14-minute video, other passengers began to join her in the protest. Among the cries of a number of children, she was told that the man would be let off the plane and she would also be removed by airport security.

Ersson protested Swedish deportation policy with a group of 25 other activists before boarding the plane. Her video was clicked more than 1.9 million times in the last 24 hours and she has been applauded by many for her civil courage. Critics have called her selfish for singlehandedly making a decision on the country’s deportation stance.

Despite the young woman’s claims that she had done nothing wrong, Swedish authorities see the matter differently. Police pointed out that passengers who refuse to obey a pilot’s orders while on board a plane can face fines or up to six months in jail. Authorities also said the Afghan man was in custody and would be deported, though they did not say when.

Near the end of her protest, a soccer team in the rear of the plane reportedly also stood up in solidarity.

Swedish plane protester Elin Ersson: ‘I knew I couldn’t back down – I had to do what I could’ https://t.co/dRn0cvzEZi