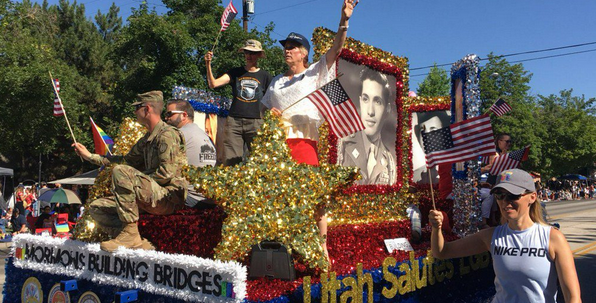 Among the high school marching bands, veterans, pageant queens and politicians, groups representing Utah Valley’s lesbian, gay, bisexual and transgender community took some historic steps. After years of being rejected from one of America’s largest patriotic celebrations in one of Utah’s most conservative cities, several LGBT community groups were finally allowed in the Freedom Festival parade.

“This is about America, all the people here, the community,” said Sgt. Jeff Clement, a Utah Army National Guard veteran who rode a float highlighting LGBT veterans put together by Mormons Building Bridges. “I get to be a part of it.”

After years of being rejected from the parade, the groups were finally allowed in after Utah County Commissioners and Provo Mayor Michelle Kaufusi inked contracts with America’s Freedom Festival that included non-discrimination clauses. The festival’s exclusion of those groups put taxpayer dollars for the parade and festival at risk. It led to back-and-forth battles over whether the LGBT groups really would be allowed in the parade.

The quilt carried by PFLAG Provo will be on display at the Affirmation International Conference. | Provo lets freedom ring — and makes history — as it allows LGBTQ groups to march in its July 4 parade for the first time https://t.co/8CSKoGBsZf #mormon #lgbt #lds #lgbtq #lgbtqia

.@FreedomFest organizers tell me they were pleased with the @MormonsBBridges and @ProvoPride entries in today’s parade. So much so, they’re willing to include the #LGBTQ groups next year: https://t.co/LoE6CrFGYD @fox13 #utpol

.@ProvoPride and Provo PFLAG just went through. Quite a bit of applause for them, especially when they did the traditional “spin the banner.” In this case, their quilt. @fox13 #utpol #LGBT pic.twitter.com/qg7XoBdVnw