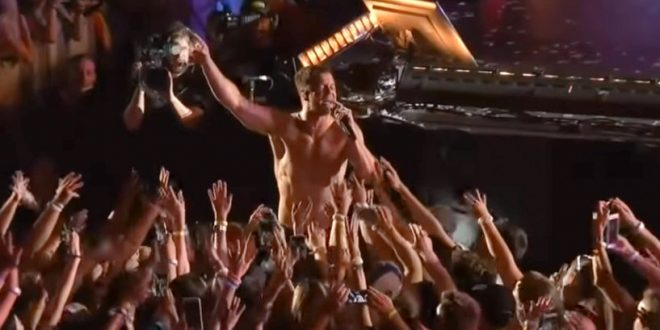 As Imagine Dragons neared the end of a hot, busy summer day and upbeat onstage rock set Saturday night in Salt Lake City, a full crowd proudly displaying rainbow colors and flags cheered as frontman and LoveLoud founder Dan Reynolds announced that the 2018 festival had reached its goal of raising more than $1 million in one day for LGBTQ organizations including Encircle, the Tegan and Sara Foundation and the Trevor Project.

“You did it by coming tonight from all walks of life, from all sides,” Reynolds told the crowd after making the announcement. “I know there are people here tonight on all sides. That’s the beauty of it. And together, all of us raised over $1 million for our LGBTQ youth.”

The second LoveLoud Festival failed to earn an endorsement from LDS Church leaders, as it did for its inaugural event in Orem last year. But on Friday, festival organizers celebrated support and recognition from Utah state government.

At a kickoff for the event at Rice-Eccles Stadium in Salt Lake City, Utah Lt. Gov. Spencer Cox read from a formal proclamation denouncing bullying and intimidation, acknowledging the state’s high youth suicide rate, and naming July 28, 2018, as “LoveLoud Day in Utah.”

“The LoveLoud Foundation offers hope and resilience to young people by letting them know that they are not alone,” the proclamation states, “and fosters a culture of hope, unconditional love, understanding, respect, acceptance, and inclusion.”

Together we raised over $1 MILLION for LGBTQ youth. Thank you for loving loud with us. pic.twitter.com/nMjuTHWOpW

Thanks @LOVELOUDFest @ImagineDragons @DanReynolds for hosting such an uplifting event tonight, and for supporting LGBT youth and families. Young people, you are loved and you are powerful. #LoveLoud pic.twitter.com/qoHEE1pv5H

Our hearts are as full as @Rice_Eccles Stadium 💓

Thank you so much to @ATT, @DanReynolds, @Imaginedragons, and the incredible community that came out to #LOVELOUD to support our LGBTQ youth ❤️💛💚💙💜

at a loss for words. tonight at @LOVELOUDfest was nothing short of a miracle. 1 million raised for our LGBTQ youth. and even more importantly – vital conversations ignited in a community that desperately needs it.

you did this. I am nothing more than a platform. thank you. X

Previous Trump Claims Mueller Has “Conflicts Of Interest”
Next Giuliani: Trump Wants Mueller To “Put Up Or Shut Up”