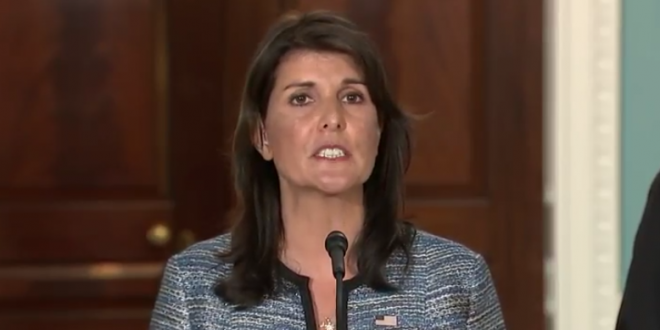 U.S. Ambassador to the United Nations Nikki Haley kicked off a conservative conference of high school students on Monday by urging attendees to avoid inflammatory language in favor of demonstrating real leadership.

“Raise your hand if you’ve ever posted anything online to quote-unquote ‘own the libs,’ ” Haley asked at the High School Leadership Summit at George Washington University. The vast majority raised their hands in response, and then erupted into spontaneous applause.

“I know that it’s fun and that it can feel good, but step back and think about what you’re accomplishing when you do this — are you persuading anyone? Who are you persuading?” Haley asked. “We’ve all been guilty of it at some point or another, but this kind of speech isn’t leadership — it’s the exact opposite.”

The conference was organized by the Charlie Kirk-founded Turning Point USA, the group whose campaigns to own the libs have included wearing diapers to protest “safe space culture” on college campuses.

Trump praised Turning Point USA this morning, a.k.a. the organization that wears diapers to own the libs but ends up owning themselves pic.twitter.com/dznEaoAcrn