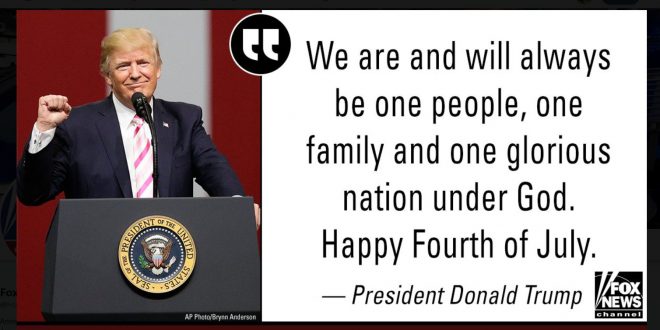 Trump: We Will Always Be One Nation Under God

President Trump marked the Fourth of July on Wednesday by hailing the “noble sacrifice” of U.S. servicemembers. In a video posted online, Trump recounted the story of the Declaration of Independence and the war against Great Britain that ensued.

“It was 242 years ago today in Philadelphia that 56 brave representatives of the American people adopted our Declaration of Independence,” Trump said. “They announced to the world that America would be free and America would be independent.”

“They pledged their lives, their fortunes and their sacred honor,” he continued. “In so doing, they forever changed the course of human history. We are and will always be one glorious nation under God.”