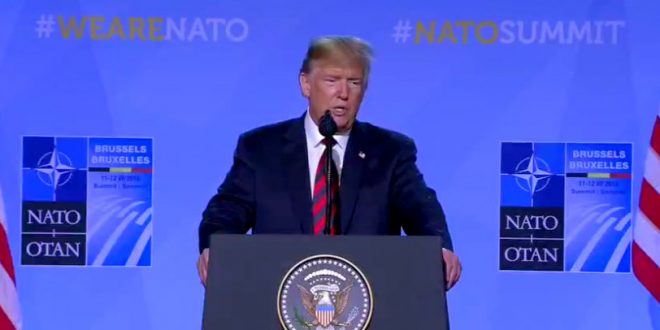 Trump Threatens To Withdraw US From NATO

Trump warned of “grave consequences” if allies do not immediately meet higher spending targets, derailing a morning meeting of NATO leaders with the leaders of Georgia and Ukraine on the second day of a NATO leaders’ summit on Thursday. One NATO official said Trump wants a plan from alliance members by January on how to reach the spending target.

Some officials urged caution in interpreting Trump’s remarks, but say allies clearly heard a threat. Word of Trump’s threat set off a wild game of telephone at NATO headquarters as officials and reporters tried to sort out what exactly Trump told fellow leaders.

Trump says he can withdraw from the NATO treaty without congressional approval. The treaty was signed by the US on April 4, 1949 and ratified by the Senate on July 21, 1949. The Constitution says all treaties “shall be the supreme law of the land.” pic.twitter.com/c9vPaUFu9a

If you are just waking up, Donald Trump blew up a NATO meeting, apparently threatened leaders that the US might withdraw if they don’t meet his spending demands, then called a hasty press conference where he asserted he could probably do so without Congressional approval. https://t.co/leAFH7nDmZ

NATO ordered an emergency session after President Trump warned if allies didn’t immediately meet the 2% military-spending target ‘I’ll do my own thing’ https://t.co/aEPnWx0BXn