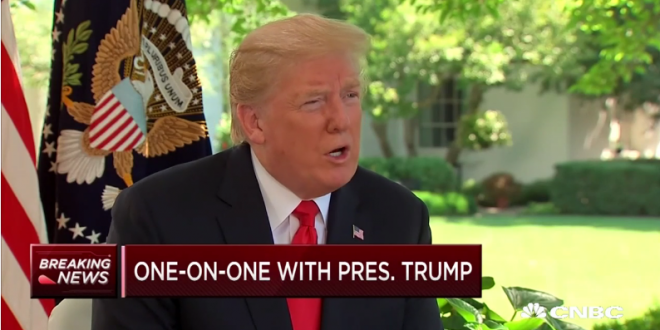 President Donald Trump said the stock market rally since his election victory gives him the opportunity to be more aggressive in his trade war with China and other countries. “This is the time. You know the expression we’re playing with the bank’s money,” he told CNBC’s Joe Kernen in a “Squawk Box” interview aired Friday.

The president also said he is willing to slap tariffs on every Chinese good imported to the U.S. should the need arise. “I’m ready to go to 500,” Trump added.

The reference is to the dollar amount of Chinese imports the U.S. accepted in 2017 — $505.5 billion to be exact, compared with the $129.9 billion the U.S. exported to China, according to Census Bureau data.

China, the European Union and others have been manipulating their currencies and interest rates lower, while the U.S. is raising rates while the dollars gets stronger and stronger with each passing day – taking away our big competitive edge. As usual, not a level playing field…

….The United States should not be penalized because we are doing so well. Tightening now hurts all that we have done. The U.S. should be allowed to recapture what was lost due to illegal currency manipulation and BAD Trade Deals. Debt coming due & we are raising rates – Really?

Farmers have been on a downward trend for 15 years. The price of soybeans has fallen 50% since 5 years before the Election. A big reason is bad (terrible) Trade Deals with other countries. They put on massive Tariffs and Barriers. Canada charges 275% on Dairy. Farmers will WIN!