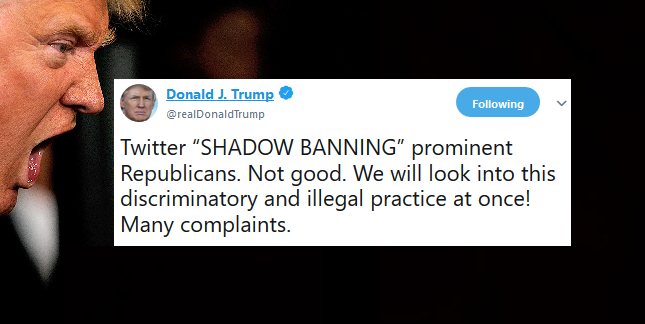 Trump’s tweet came the morning after a Vice News report that said Twitter was limiting the visibility of prominent Republicans in search results.

The report said Republican Party chair Ronna McDaniel, as well as some conservative commentators and Donald Trump Jr.’s spokesman, had been impacted by the practice.

To start with, and to state the most obvious, this sort of moderation isn’t shadow banning. Users following the affected accounts will still see their tweets; those accounts still appear in search (just not in the search-bar auto-population).

“Shadow banning,” as generally imagined and described by the activists who claim they’ve been affected, would actively suppress user content even to followers, not just make accounts one click more difficult to find.

Which is why, to the extent that this is even a problem, it’s pretty easy to buy Twitter’s explanation that this is a side effect of a minimal measure designed to make sure that people aren’t preemptively encouraged to consume bad information from dubious sources.

The notion that social media companies would suppress certain political points of view should concern every American. Twitter owes the public answers to what’s really going on. https://t.co/i9UtbxJrt0

Twitter “SHADOW BANNING” prominent Republicans. Not good. We will look into this discriminatory and illegal practice at once! Many complaints.