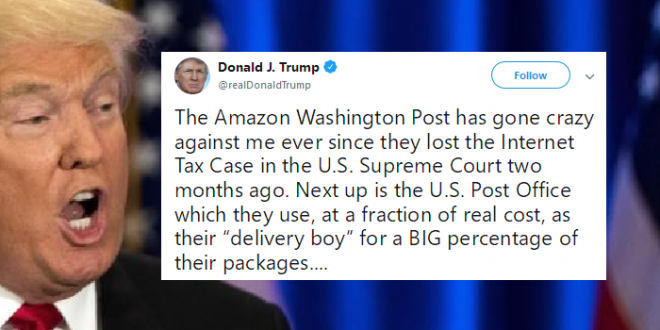 President Donald Trump is again taking aim at Amazon for “using” the U.S. Postal Service as its “delivery boy,” raising the possibility of bringing antitrust claims against the company.

Trump railed against the e-retailer and the newspaper — both owned by billionaire Jeff Bezos — in a series of tweets Monday morning, claiming the newspaper has “gone crazy” against Trump in the months since Amazon “lost the Internet Tax Case in the U.S. Supreme Court.”

Shares of Amazon fell nearly 2 percent in early trading following the President’s tweets. The Supreme Court ruled in June that states have the right to collect potentially billions of dollars in taxes from internet sales — a decision that left Amazon largely unaffected.

The Amazon Washington Post has gone crazy against me ever since they lost the Internet Tax Case in the U.S. Supreme Court two months ago. Next up is the U.S. Post Office which they use, at a fraction of real cost, as their “delivery boy” for a BIG percentage of their packages….

….In my opinion the Washington Post is nothing more than an expensive (the paper loses a fortune) lobbyist for Amazon. Is it used as protection against antitrust claims which many feel should be brought?

This is the clearest Trump has been about how he is going after Amazon because he is angry at Washington Post investigative reporting. He went straight from criticizing a Post story to threatening an antitrust case against Amazon. pic.twitter.com/A6uXVP3ws0