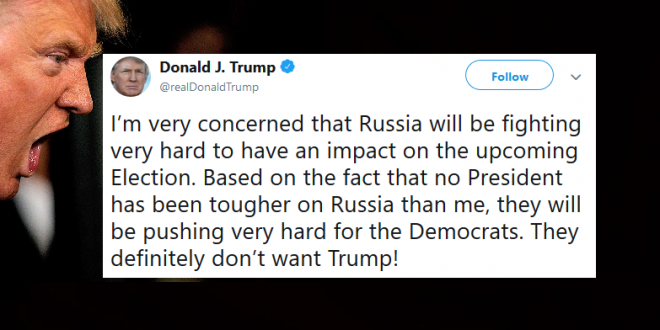 Trump: Russia Will Try To Hack Midterms To Favor Dems

President Trump claimed without evidence Tuesday that Russia would attempt to meddle in the 2018 midterm elections in support of Democrats. Trump was aboard Air Force One headed to an event in Kansas City when he sent the tweet. The entire US intelligence community has been in agreement that Russia meddled in the 2016 presidential election in support of Trump. The community has also warned that Russia will attempt to influence the 2018 midterms but has provided no evidence that Russia would side with one political party.

I’m very concerned that Russia will be fighting very hard to have an impact on the upcoming Election. Based on the fact that no President has been tougher on Russia than me, they will be pushing very hard for the Democrats. They definitely don’t want Trump!

Previous American Family Association: Bigfoot Sightings Are “Demonic Virtual Reality” Projections By Satan [AUDIO]
Next Trump Plans $12 Billion Bailout To Farmers Because Of Tariffs Imposed On Their Goods By His Own Trade War