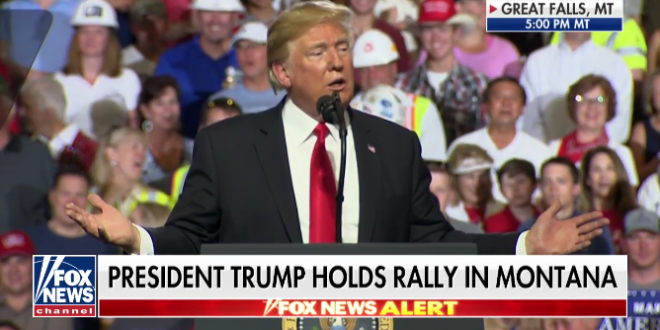 In a move that was, like so much of his rhetoric, both disturbing and completely unsurprising, on Thursday night President Trump mocked the #MeToo movement, revived his “Pocahontas” insult against Senator Elizabeth Warren, and imagined throwing a DNA test at her and challenging her to prove she’s Native American.

It was quite the mix of racism and sexism, but Trump has attacked the senator’s “Indian” heritage on numerous occasions. He also started going after the #MeToo movement months ago, and earlier in the day he said he believes “100 percent” his pal Representative Jim Jordan’s insistence that he did not turn a blind eye to the sexual abuse of student athletes.

Hey, @realDonaldTrump: While you obsess over my genes, your Admin is conducting DNA tests on little kids because you ripped them from their mamas & you are too incompetent to reunite them in time to meet a court order. Maybe you should focus on fixing the lives you’re destroying.

Trump’s main asset as a candidate was making people afraid of him. As prez, he seems to have decided it is still the best road to take, to try to instill fear that he will do anything (Warren/DNA test, hitting MeToo movement). The risk for him is further firing up Dems for fall

“I’m going to get one of those little DNA kits and if I’m debating her, we will toss it to her, very gently so it doesn’t injure her arm, and we’ll say, ‘Pocahontas, I’ll give you a million dollars if you take the test to show you’re an Indian!'” – Trump on Elizabeth Warren pic.twitter.com/iunEDZ21Sr