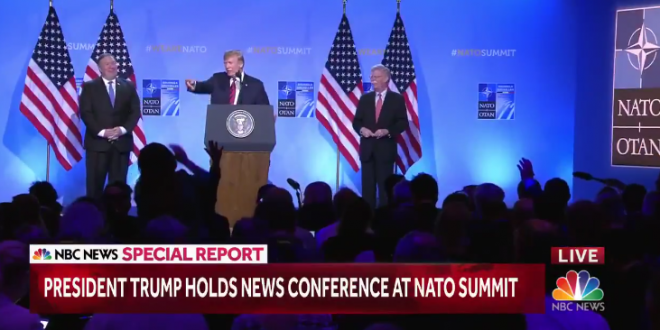 Donald Trump is reminding people he’s a “very stable genius.” No, seriously. The president held a surprise press conference in NATO today, during which he said Vladimir Putin is not an enemy again, shrugged off the upcoming protests against him in the United Kingdom, and claimed the summit “all came together at the end” now that America’s allies have said they’ll up their defensive spending. As Trump spoke from the lectern, a reporter asked if he’ll start contradicting what he’s saying once he gets back on the Twitter machine. Here’s Trump’s answer, which drew snickering from the room: “No, that’s other people that do that I don’t. I’m very consistent. I am a very stable genius.”

Reporter: “We understand your message, but some people ask themselves, will you be tweeting differently once you board the Air Force One?”

Pres. Trump: “That’s other people that do that. I don’t. I’m very consistent. I’m a very stable genius.” https://t.co/KGFjLrdE0n pic.twitter.com/Uczbat5XKO

‘Everybody in the room thanked me. They thanked me a lot. I have made Nato stronger. I’m a very stable genius’. The narcissism of the US President at the Nato summit

… in front of the entire world.

So just to recap: Trump claims total credit for having NATO increase spending, says countries will pay more and faster, but gives no specifics
Says he’s a very “stable genius”
Trump says he will ask Putin about election meddling and Ukraine
Says “they like me” in UK

Asked if his comments at NATO will change once he leaves Brussels and starts tweeting again, President Trump says no and he’s a “very stable genius.” pic.twitter.com/1Lf9Fn8FVU