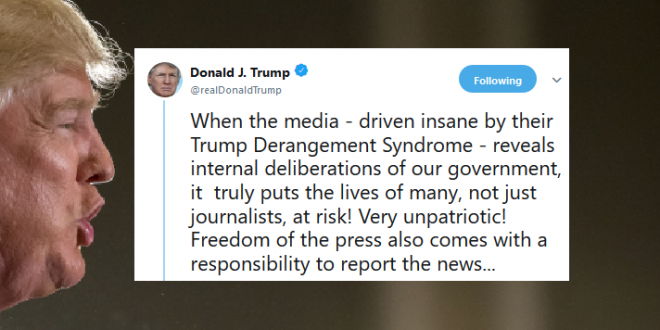 Glorious Leader is ever so pissed once again:

Here’s four more: President Trump on Sunday unleashed a tirade against the media in which he called reporters “unpatriotic” for reporting on the inner workings of the government. In a series of tweets, the president singled out The New York Times and The Washington Post for writing “bad stories” about his administration, which he amounted to “selling out” the country.

The president’s latest Twitter attacks on the media comes hours after he revealed he met with A.G. Sulzberger, the publisher of The New York Times. Trump claimed the two discussed how he believes the media has become the “enemy of the people.”

The meeting took place on July 20, and had been off the record, The New York Times said in a statement. However, once Trump acknowledged it took place, Sulzberger issued a statement saying he warned Trump about the danger of his rhetoric toward reporters.

When the media – driven insane by their Trump Derangement Syndrome – reveals internal deliberations of our government, it truly puts the lives of many, not just journalists, at risk! Very unpatriotic! Freedom of the press also comes with a responsibility to report the news…

…accurately. 90% of media coverage of my Administration is negative, despite the tremendously positive results we are achieving, it’s no surprise that confidence in the media is at an all time low! I will not allow our great country to be sold out by anti-Trump haters in the…

…dying newspaper industry. No matter how much they try to distract and cover it up, our country is making great progress under my leadership and I will never stop fighting for the American people! As an example, the failing New York Times…

…and the Amazon Washington Post do nothing but write bad stories even on very positive achievements – and they will never change!

There is No Collusion! The Robert Mueller Rigged Witch Hunt, headed now by 17 (increased from 13, including an Obama White House lawyer) Angry Democrats, was started by a fraudulent Dossier, paid for by Crooked Hillary and the DNC. Therefore, the Witch Hunt is an illegal Scam!