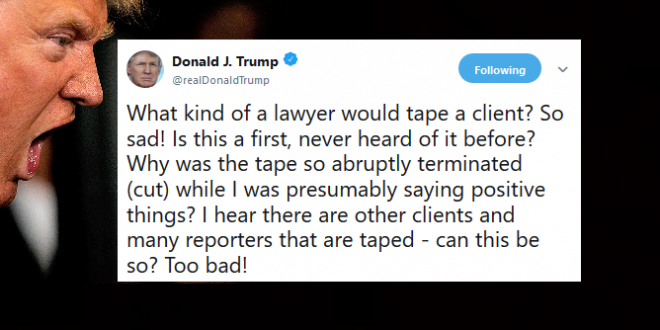 President Donald Trump on Wednesday responded to a newly released audio tape that appears to capture him discussing a payment to former Playboy model Karen McDougal with his personal lawyer Michael Cohen, saying the recording was “cut while I was presumably saying positive things.” In the recording, Trump, then a presidential candidate, appears to be discussing setting up a company to finance a $150,000 payment to silence McDougal after she claimed she had a months-long affair with Trump.

What kind of a lawyer would tape a client? So sad! Is this a first, never heard of it before? Why was the tape so abruptly terminated (cut) while I was presumably saying positive things? I hear there are other clients and many reporters that are taped – can this be so? Too bad!

Previous Cohen’s Lawyer: Trump Will Be Done In By The Truth, There Are More Tapes, And We Don’t Want A Pardon
Next Vandal Destroys Trump’s Hollywood Star With Pickax