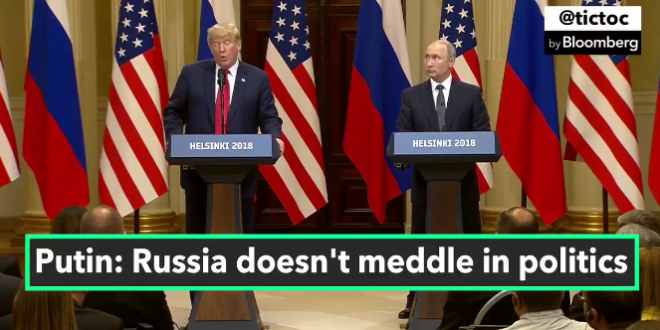 President Donald Trump on Monday appeared to publicly side with Russian President Vladimir Putin over his own intelligence agencies, refusing to condemn the Kremlin for interference in the 2016 election and saying that “I don’t see any reason” to believe that Russia was behind the hacking of Democratic computer servers.

Trump’s remarkable statement, during a news conference in Helsinki, Finland, after holding a two-hour one-on-one meeting with Putin, came after special counsel Robert Mueller indicted 12 Russians on Friday over allegations of involvement in the state-ordered election-interference operation.

Trump repeatedly attacked the FBI, praised Putin as a “good competitor,” refused to say Russia was accountable for any aspects of fraying U.S.-Russia relations and attacked Mueller’s inquiry as “a disaster for our country.” Putin repeatedly denied that Russia interfered in the U.S election, though he declared that he did want Trump to win the 2016 presidential election.

Pres. Trump on Russia meddling into U.S. election: “Pres. Putin was extremely strong and powerful in his denial today, and what he did is an incredible offer—he offered to have the people working on the case come and work with their investigators.” https://t.co/HERDboeaJt pic.twitter.com/QE12aUIJ6Y

Asked if he would denounce Russian meddling in 2016 U.S. elections, Pres. Trump says, “I have Pres. Putin, he just said it’s not Russia. I will say this, I don’t see any reason why it would be.” https://t.co/JbA2emBRPM pic.twitter.com/avYs3p0D6p