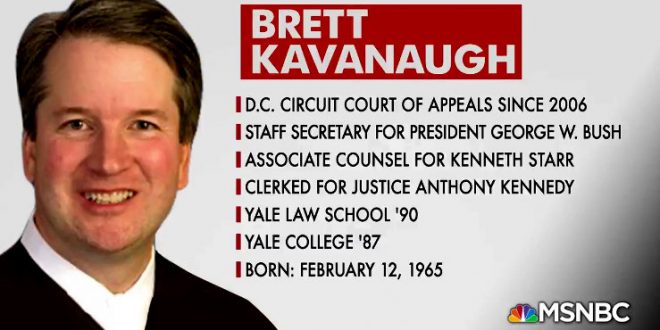 The nomination of Judge Kavanaugh, 53, a federal appeals court judge, former aide to President George W. Bush and onetime investigator of President Bill Clinton, was not a huge surprise, given his conservative record, elite credentials and deep ties among the Republican legal groups that have advanced conservatives for the federal bench.

But it will galvanize Democrats and Republicans in the months before the midterm elections. Justice Kennedy, who is retiring, held the swing vote in many closely divided cases on issues like abortion, affirmative action, gay rights and the death penalty. Replacing him with a committed conservative, who could potentially serve for decades, will fundamentally alter the balance of the court and put dozens of precedents at risk.

If confirmed, Kavanaugh could be the decisive vote the president needs to ensure that his concerted campaign to undermine civil liberties and civil rights has long-term impact. pic.twitter.com/rE9SR7dhcf

Judge Kavanaugh's own writings make clear that he would rule against reproductive rights and freedoms, and that he would welcome challenges to the constitutionality of the Affordable Care Act. #WhatsAtStake #StopKavanaugh #ScotusPick pic.twitter.com/j94kPUXSoM

AFA and other conservative groups will oppose Judge Kavanaugh's nomination. His reasoning helped Justice Roberts find a way to turn a "mandate" into a "tax."

Source tells me evangelicals are wary of Kavanaugh — and those concerns were expressed to POTUS.

President Trump promised a constitutionalist – someone who will call balls and strikes according to the Constitution. Judge Kavanaugh has a long & praiseworthy history of judging as an originalist. We look forward to having a justice with his philosophical approach on the Court.