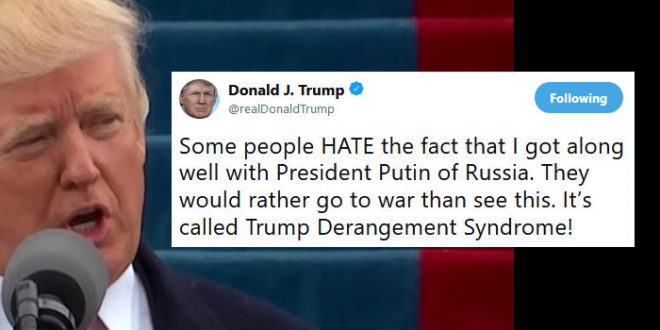 Donald Trump has accused critics who condemned his disastrous meeting with Vladimir Putin of having ‘Trump Derangement Syndrome.’ The president went on the defensive less than 24 hours after he was forced into the most humiliating climbdown since he took office over the Putin summit. Trump claimed he had accidentally misspoken when saying he believed Putin’s denial that Russia had meddled in the 2016 presidential election over his own security services. Trump claimed ‘confusion’ over his agreement with Vladimir Putin’s denial of any meddling happened because he accidentally used the word ‘would’ instead of ‘wouldn’t.’

Some people HATE the fact that I got along well with President Putin of Russia. They would rather go to war than see this. It’s called Trump Derangement Syndrome!

“A lot of Democrats wished they voted for the Tax Cuts because the economy is booming – we could have 4% growth now and the Fed said yesterday that unemployment could drop again.” @foxandfriends @kilmeade

So many people at the higher ends of intelligence loved my press conference performance in Helsinki. Putin and I discussed many important subjects at our earlier meeting. We got along well which truly bothered many haters who wanted to see a boxing match. Big results will come!