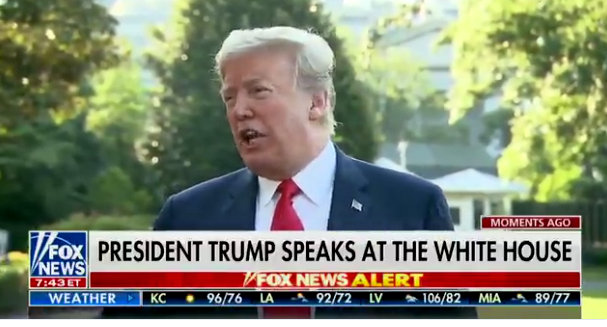 Trump: Meeting With Putin Is Easier Than NATO Allies

President Donald Trump said his easiest meeting on his foreign trip to Europe during the next week may be his sit down with Russian President Vladimir Putin.

Trump spoke to reporters before leaving for the NATO summit in Brussels, the first stop on his trip. He then plans to travel to the United Kingdom where he will hold talks with Prime Minister Theresa May and meet with Queen Elizabeth II. Trump will have his first standalone summit with Putin in Helsinki, Finland, Monday.

“I have NATO. I have the UK, which is in somewhat turmoil. And I have Putin. Frankly, Putin may be the easiest of them all,” Trump said Tuesday. “Who would think?” Later, when asked if he sees Putin as a friend or a foe, Trump said he sees the Russian leader as a “competitor.”

As Trump says of Putin meeting: “Frankly, Putin may be the easiest of them all.” a reminder:
-Putin annexed Crimea
-Putin invaded E. Ukraine
-Putin interfered in 2016 to aid Trump
-Putin supports Assad in Syria & targets civilians to do so
-Putin used nerve agent to murder in UK

During remarks made before he left for Europe, Trump bashed NATO and the EU and said Putin “may be the easiest” meeting he has during the trip.