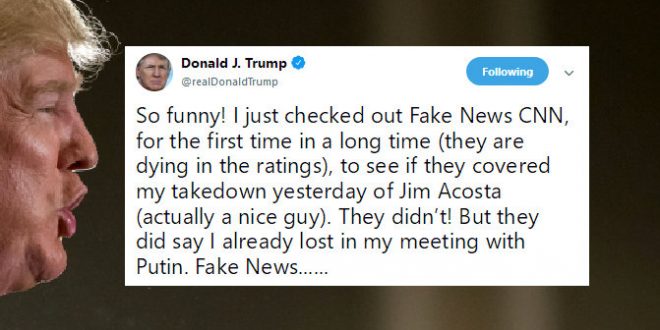 CNN, of course, did report on Trump’s latest attack:

Even when he’s thousands of miles from home, President Trump defaults back to his “fake news” insult whenever it’s convenient or politically expedient. He called on NBC’s Kristen Welker, who asked, “Are you giving Russian president Vladimir Putin the upper hand heading into your talks, given that you are challenging these alliances that he seeks to break up and destroy?”

Trump: “See, that’s such dishonest reporting,” he said, lambasting both NBC and CNN, which he frequently lumps together. Later, CNN’s Jim Acosta tried to ask a question: “Mr. President, since you attacked CNN, can I ask you a question?” “No, no,” Trump responded, calling the network “fake news.”

“I don’t take questions from CNN,” Trump said, even though he did take a question from CNN’s Jeremy Diamond on Thursday. Trump then called on Fox News correspondent John Roberts and called Fox “real news.”

So funny! I just checked out Fake News CNN, for the first time in a long time (they are dying in the ratings), to see if they covered my takedown yesterday of Jim Acosta (actually a nice guy). They didn’t! But they did say I already lost in my meeting with Putin. Fake News……

….Remember, it was Little Jeff Z and his people, who are told exactly what to say, who said I could not win the election in that “there was no way to 270” (over & over again) in the Electoral College. I got 306! They were sooooo wrong in their election coverage. Still hurting!