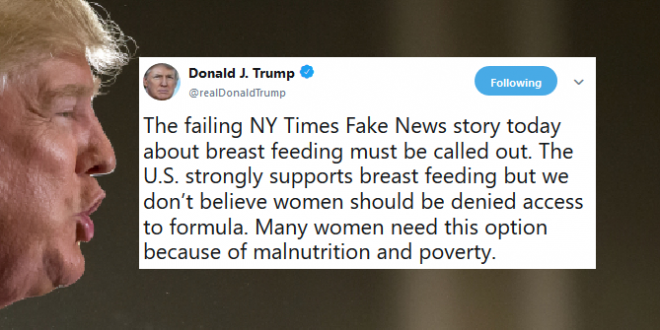 A resolution to encourage breast-feeding was expected to be approved quickly and easily by the hundreds of government delegates who gathered this spring in Geneva for the United Nations-affiliated World Health Assembly. Based on decades of research, the resolution says that mother’s milk is healthiest for children and countries should strive to limit the inaccurate or misleading marketing of breast milk substitutes. Then the United States delegation, embracing the interests of infant formula manufacturers, upended the deliberations.

They turned to threats, according to diplomats and government officials who took part in the discussions. Ecuador, which had planned to introduce the measure, was the first to find itself in the cross hairs. The Americans were blunt: If Ecuador refused to drop the resolution, Washington would unleash punishing trade measures and withdraw crucial military aid. The Ecuadorean government quickly acquiesced.

The failing NY Times Fake News story today about breast feeding must be called out. The U.S. strongly supports breast feeding but we don’t believe women should be denied access to formula. Many women need this option because of malnutrition and poverty.

He claims the story is false and then backs it up https://t.co/uNMgsXDiOX