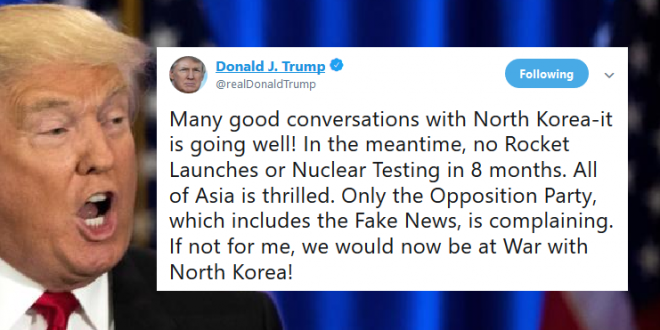 Trump: If Not For Me, We’d Be At War With North Korea

President Trump said Tuesday that the United States would be at war with North Korea without his efforts and that conversations with the nation’s leaders are “going well” — an assessment at odds with recent reports that North Korea is working to conceal key aspects of its nuclear weapons program.

The president’s comments in a morning tweet followed a report Saturday in The Washington Post that U.S. intelligence officials have concluded that North Korea does not intend to fully surrender its nuclear arms stockpile and instead is considering ways to conceal the number of weapons it has and its secret production facilities.

Many good conversations with North Korea-it is going well! In the meantime, no Rocket Launches or Nuclear Testing in 8 months. All of Asia is thrilled. Only the Opposition Party, which includes the Fake News, is complaining. If not for me, we would now be at War with North Korea!