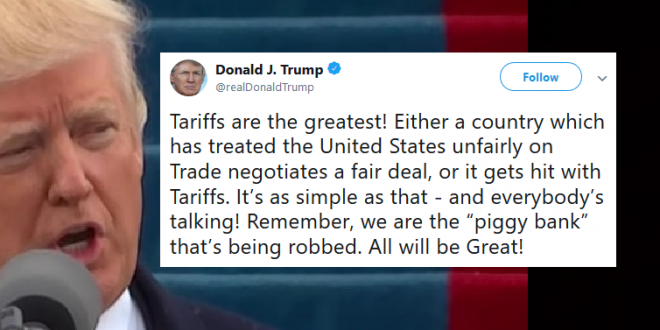 Ahead of a big trade meeting with European officials, President Donald Trump on Tuesday hailed tariffs as both a negotiating tactic and as punishment. The tweet came ahead of his Wednesday meeting with European Commission President Jean-Claude Juncker. The two leaders plan to discuss U.S tariffs on aluminum and steel, and Trump’s threat to extend duties to European cars coming into the United States. Economist have said that Trump’s tariff fights with Europe and China will lead to trade wars that will raise prices for consumers worldwide.

Countries that have treated us unfairly on trade for years are all coming to Washington to negotiate. This should have taken place many years ago but,
as the saying goes, better late than never!

Tariffs are the greatest! Either a country which has treated the United States unfairly on Trade negotiates a fair deal, or it gets hit with Tariffs. It’s as simple as that – and everybody’s talking! Remember, we are the “piggy bank” that’s being robbed. All will be Great!