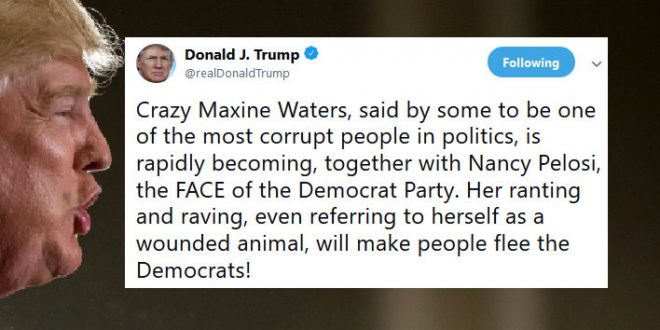 President Trump predicted Tuesday that voters will reject Democrats in the mid-term elections because of lawmakers like “Crazy” Maxine Waters, D-Calif., who called on people to harass Trump administration officials.

Waters faced backlash last month for encouraging her supporters to harass members of the Trump administration they see in public. Trump said antics like that, along with Democratic calls to abolish U.S. Immigration and Customs Enforcement, would make it impossible for Democrats to succeed in the mid-term elections.

Crazy Maxine Waters, said by some to be one of the most corrupt people in politics, is rapidly becoming, together with Nancy Pelosi, the FACE of the Democrat Party. Her ranting and raving, even referring to herself as a wounded animal, will make people flee the Democrats!

Many Democrats are deeply concerned about the fact that their “leadership” wants to denounce and abandon the great men and women of ICE, thereby declaring war on Law & Order. These people will be voting for Republicans in November and, in many cases, joining the Republican Party!

How can the Democrats, who are weak on the Border and weak on Crime, do well in November. The people of our Country want and demand Safety and Security, while the Democrats are more interested in ripping apart and demeaning (and not properly funding) our great Law Enforcement!

When we have an “infestation” of MS-13 GANGS in certain parts of our country, who do we send to get them out? ICE! They are tougher and smarter than these rough criminal elelments that bad immigration laws allow into our country. Dems do not appreciate the great job they do! Nov.