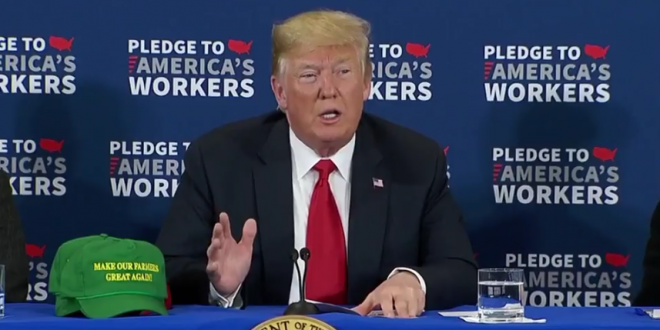 Pig prices are plunging – so, too, those of American soybeans. America’s heartland farmers, in states largely supportive of President Donald Trump, say they are starting to feel real financial pain from a tit-for-tat trade war Trump once promised will be “easy to win.”

“We have loss of confidence in our products and we have loss of price,” said hog farmer Gregg Hora of Fort Dodge, Iowa. “Pig farmers are currently losing about $25-30 per pig.” “Patience is wearing thin on U.S. pork producers because the next six months of market prices – there’s a lot of red ink,” Hora said. “We need the administration to come to these deals quickly.”

While Wall Street expressed relief Wednesday with word from the White House that a trade fight with Europe would not escalate, many farmers remain anxious. Existing tariffs still remain in place and the announcement did not resolve Chinese sanctions on American pork and soy which have had the biggest bite.

The pro-Trump crowd cheered and chanted “USA, USA,” as he got off the plane and waved. U.S. Rep. Rod Blum was behind the president as he came down the aircraft’s ramp to the tarmac. He was also greeted by Gov. Kim Reynolds and the mayors of Pella, Marshalltown and Bondurant. Those Iowa towns were hit by tornadoes last week.

Trump then headed straight to the crowd, using both hands to greet them as one woman yelled, “We love you.” Some of the supporters’ signs read: “Ronald Reagan is my second favorite president” and “Buy American hire American,” according to a pool report.

Previous NRA TV Host: Nobody Gives A Rat’s Ass That Trump Has Bragged About Sexually Assaulting Women [VIDEO]
Next Old Glory Only Act: 33 House Republicans Back Bill That Would Forbid US Embassies From Flying Rainbow Flag