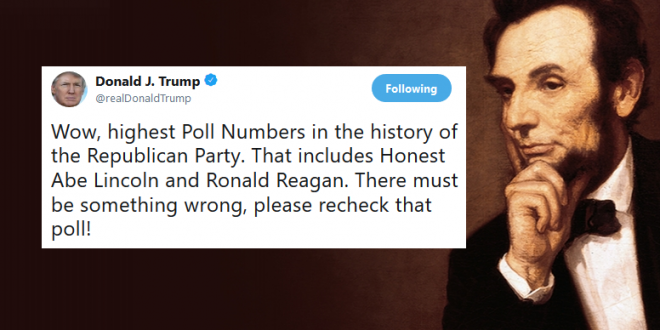 President Trump on Sunday repeated false claims that his poll numbers among Republican are higher than former President Lincoln. In an early morning tweet, Trump tweeted that he has the “highest Poll Numbers in the history of the Republican Party.” It is unclear what poll Trump was citing, but the tweet echoed similar comments he made earlier this month.

A Gallup poll released earlier in July found that 90 percent of Republicans approved of Trump in June, which would make him one of the most popular modern presidents with his own party at this point in his first term. Presidential polling only stretches back to the Truman administration, however.

Wow, highest Poll Numbers in the history of the Republican Party. That includes Honest Abe Lincoln and Ronald Reagan. There must be something wrong, please recheck that poll!

Imagine being so narcissistic that you compare yourself to Abraham Lincoln (who lived and died decades before scientific polling was invented).

Trump is deeply unpopular according to real, non-imaginary polls. This is just like his fake Time cover. pic.twitter.com/Zb57T2SvXq

TRUMP: I have flown Air Force One way more than Honest Abe Lincoln.

Not a fair comparison since the surveys during Honest Abe Lincoln’s time were unscientific Twitter polls done by @LouDobbs #TrumpTrain https://t.co/HFOMrmG1FL

In fairness, most experts think that the Quinnipiac polls probably understated James Garfield’s level of support. He did better with the robot calls. https://t.co/NB4Tz2T3bY